Chris Brown and Rihanna have called it quits

Chris Brown told Ryan Seacrest in an interview with KIIS-FM radio on Tuesday “It’s all about my responsibility,’.

He also said that he tried his best to reform himself over the years until the couple recently reconciled and that he was never sure that Rihanna would even speak to him again.

He added that he was ‘eternally grateful’ that in the end she found it within herself to forgive him, leading to their reconciliation.

‘I just tried my best to be the best man I could be over the years and just show her how remorseful and sorry I was for the incident and that time was probably the worst part of my life and being that she has and she’s a wonderful person I’m eternally grateful and thankful,’ he said.

But fast forward a few days later and things appeared to have changed between Chris Brown and the singer.

The 23-year-old revealed during an interview with Los Angeles hip hop station Power 106 on Friday that he and Rihanna have called it quits.

We have lost a Legend: Chinua Achebe is dead.

One of the world’s most celebrated Writers,Nigerian novelist Professor Chinua Achebe reportedly died last night in the hospital in Boston, Massachusetts, United States .

Professor Achebe is most famous for his Novel Things Fall Apart,that has sold over twelve million copies till date and has been translated into more than fifty languages.

Before his death, Professor Achebe was editor of the Heinemann African Writers Series and also worked as a professor at David and Marianna Fisher University and a Professor of Africana Studies at Brown University.

MAY HIS SOUL REST IN PEFERCT PEACE

I lost a dear friend last month. She was the loveliest,friendliest,most loyal person you would ever meet. She was beautiful but inside and out. A real gem. Today would have been her Birthday. It still hurts a lot to think about her,because I am still surprised and angry that she is gone. I guess we(all her friends) just have to accept the fact that she is gone and is going to stay in our hearts… even if she isn’t in our lives.”
We all miss her so much. R.I.P Nafi.

N.B: R.I.P. to the people who lose their lives each day & never get acknowledged because they aren’t celebrities.

Incredible Waterfall Restaurant at the Villa Escudero in the Phillipines!!!

March 19, 2013 3:44 pm / 8 Comments on Incredible Waterfall Restaurant at the Villa Escudero in the Phillipines!!!

Here is a new post for my Travel category.The Villa Escudero Resort of San Pablo City in the Philippines offers a one of a kind experience for guests to get  close to a  waterfall while enjoying their lunch! The entire villa is in fact a historical plantation surrounded by mountains and coconut trees.The restaurant sits at the foot of the Labasin Falls where guests can enjoy local cuisine at handmade bamboo tables while clear spring water runs over their feet. Isn’t this just Awesome?

For quite a while now,i have become quite interested in Indian Movies.I love the way they portray their culture in such a lovely  way. This Movie is one of the best Indian Movie i have Watched so far. Please download(with subtitles of course and watch). The movie came out in 2010,i am still suprised it wasnt India’s entry into the Oscars for Foreign Language Film Category.Its a must watch starring my best Bollywood Actor and Actress Hrithik Roshan and Aishwarya Rai,the movie lasts for just 2 hr. 15 min. Its a must watch!!!!

(Am sorry i cant upload a video,i am having some difficulties)

Here is the Movie Plot:

Ethan Mascarenhas, formerly the world’s greatest magician, has been quadriplegic since a performance went wrong 14 years before. For the past 12 years Ethan’s health has been relatively stable, largely due to the relentless dedication of his nurse, Mrs Sofia D’Souza. He lives and works at his home, spreading new magic to millions of people with his irrepressible wit and spirit through books he has written and his radio show. But now his internal organs are failing. To avoid permanent hospitalization and machine life-support, Ethan petitions a court to be legally allowed to die. Ethan’s request – his ‘guzaarish’ – shocks everyone in his world, but especially threatens his relationship with Sofia, who is the core of his existence.

The Collections – Leading model Sui He shows off the spring collections for the March cover story of Harper’s Bazar China. The Chinese beauty poses for Mei Yuan Gui in the standout designs of Haider Ackermann, Miu Miu, Chanel and Alexander McQueen amongst other selected by Fan Xiaomou. For beauty, Sui rocks a variety of looks courtesy of hair stylist Chen Feng and makeup artist Sun Qi.

Nicki Minaj covers the April 2013 issue of Elle and talks about her reinvention and more.

On dealing with bullies growing up
“I went through a lot of bullying early on. Girls made my life a living hell. We had come to America from a different country. My brother and I had accents. It was very tough. So I’ve always put up this wall—it was a self-defense mechanism growing up—because I was almost expecting people to attack me. And I still have it. It’s sad.”

On being comfortable wearing less makeup
“I’m so, so attached to my pink lipstick, it’s hard. I feel that it’s become a part of me. To go in front of the camera, without pink lips or big ol’ crazy lashes— you know, nothing— I felt naked. It was scary! So this photo shoot was a real accomplishment in my eyes.”

On advice for women in the workplace
“My advice to women in general: Even if you’re doing a nine-to-five job, treat yourself like a boss. Not arrogant, but be sure of what you want— and don’t allow people to run anything for you without your knowledge. You want everyone to know, Okay, I can’t play games with her. I have to do right by this woman. That’s what it’s all about.

This is the Chanel Boy Handbags Spring Summer 2013 Ad Campaign .It features Alice Dellal and Model Jake Davies,and was photographed by Karl Lagerfeld. 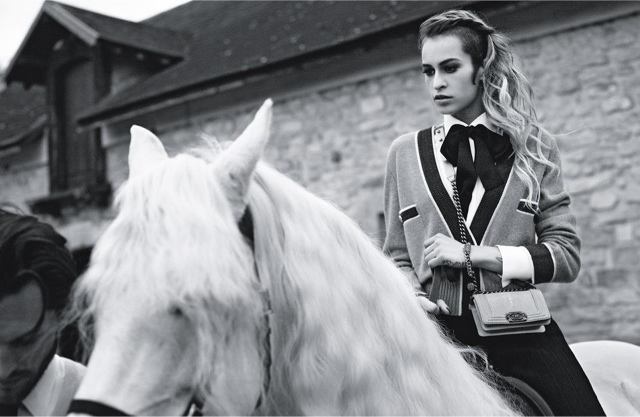 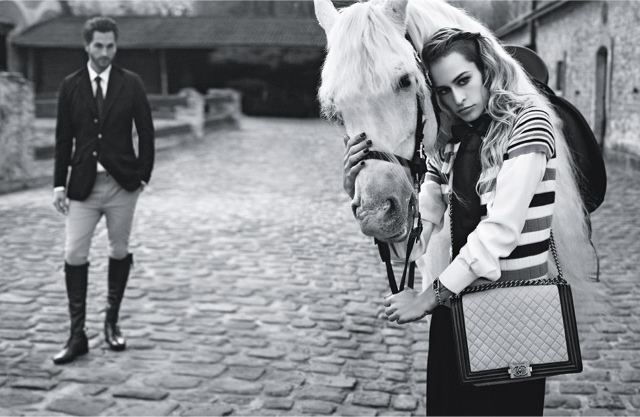 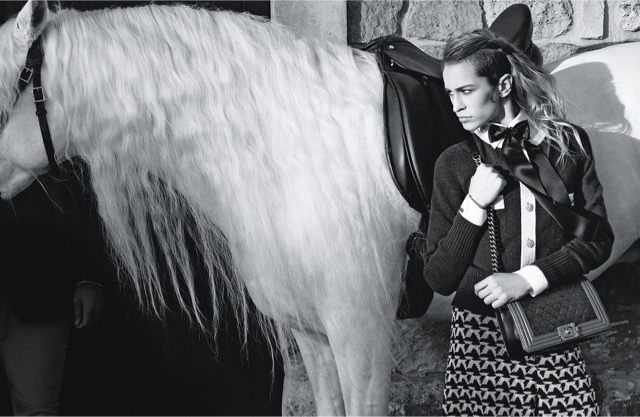 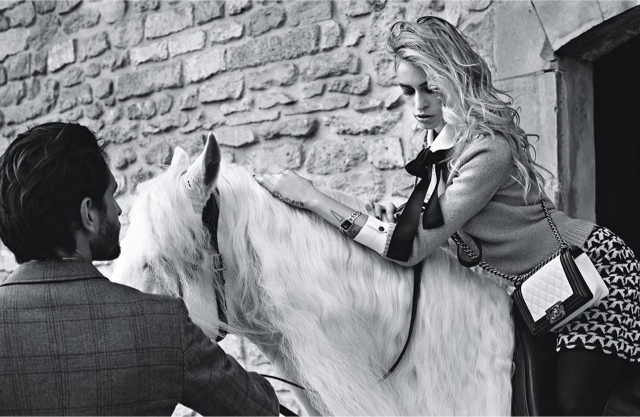