Check out the world’s most Beautiful Horse .

Is it  me or is’nt this the most beautiful creature you have seen ? This Horse is  Gold in colour,from Turkey  and holds the title of being the most beautiful horse in the world. If i owned this horse i think i would look at it all day.

I have decided to start  a category dedicated to showing the street style  of Nigerians ,and  what the most stylish and fashionable Nigerians are wearing as time goes by.Everyone knows the most Stylish Africans are Nigerians, i am not bragging just stating the fact. This looks are from recent events that just held in Nigeria,from the recent Rick Ross concert,to  a Fashion line launch etc Enjoy!  Photo credits Bella Naija. Check out bellanaija  for more Nigerian content.

Beyoncé for House of Dereon Fall 2012

Very nice right? Check out the other Designs from their Fall Catalog.

Statement Necklaces especially the Big Chunky ones have been a very big trend this year.On the red carpet,alot of female celebrities have been wearing them. You can wear them on almost everything,yes even t-shirts and jeans!

The key to really looking  fabulous with Statement necklaces is to make sure that :

If you want to get this looks,you can get some really beautiful and affordable pieces at stores like Forever 21 and H&M  . Statement Necklaces would be  a good addition to your collection.Let me show some looks so you might get some Inspiration:

Honestly i have never been a fan of piling on Pearls or Jewelry on my neck,although it works on a lot of ladies. For example the Necklace  Michelle Obama is wearing above,i will never wear,i like my pearls single,no matter the size .However if its your style,go for it.

I like this  Necklace  by Tom Binns Jessica Biel wore  for Total Recall Movie premiere  Recently. Take note of the simple hair and make-up .

One of my personal favorite looks is this  turquoise Lorraine Schwartz necklace Heidi Klum wore  to the 2012 Golden Globes. Beyonce also wore this for her spread in People‘s 2012 Most Beautiful issue.If you notice Hiedi is also wearing minimal make-up.

One statement Necklace that recently caught my eye  is this Celine Necklace.

Kim kardashian has it in two Colours. Its simple but also chunky at the same time.

You can use your statement Jewelery to spice up a plain tee -shirt. 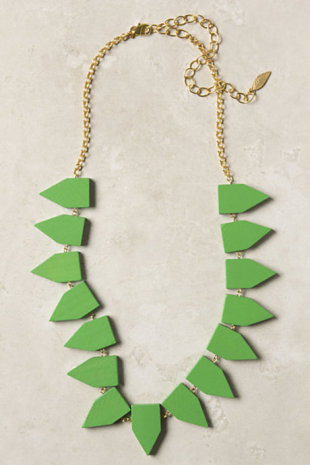 For example the beautiful pieces  pictured above will go perfectly with black ,red or white t-shirts.

Eva Alordiah and Skepta are both Covering the new issues  of Fab Magazine.They both look very good. I love it !

Pictures from the Olympics closing Ceremony .

Hey Everyone, the Olympics has come and gone,but we all have to agree this is has to be one of the most Glamorous and fun Olympics ever . I was already getting Emails on if i was going to do a post on the Closing Ceremony? Well of course i would ,the closing Ceremony was amazing! Great Performers,and Costumes were Beautiful! There was also the  highly-awaited Spice Girls performance.The fashion feature was a brilliant bonus(plus did you guys see  that Vogue Editorial i posted come to life?) ,honestly Britain rocks!!!!  Lets see what Brazil will have for us in 2016. Here are some of the pictures from the closing Ceremony.

It was really  nice to see Victoria Performing again.

Brian May of Queen and Jessie J perform at London 2012 Olympics Closing Ceremony.

Marisa Monte performs for the Rio Olympic 2016 handover during the London 2012 Olympics Closing Ceremony on 12 August 2012 in London, England.

Dancers at the Events

Trucks were driven  into the arena carrying billboard-sized posters of the models. The images then fell to reveal the models themselves, all wearing  gold outfits ,the very same ones from the Vogue September Editorial i posted about and walking and posing to the music of  of David Bowie’s “Fashion.”Supermodels  Kate Moss, Naomi Campbell etc took part in the segment, all wearing clothes by famed British designers  including Alexander McQueen, Erdem, Vivienne Westwood, Christopher Kane and Burberry.

There was a supermodel for each great British fashion designer featured in the fashion segment.

Victoria Beckham’s  label featured  in the  fashion hall of fame with Georgia May Jagger modelling  her designs.

Below is the Medal Count for the Top 10 Countries

Check out this Beautiful Editorial for Vogue UK September 2012.The theme is MIDAS TOUCH. I love all the Gold Dresses  used.I have always said that the very best outfits  are the ones used in Editorials.

Nike Oshinowo on the Cover of Mania Magazine August Issue

Nike Oshinowo is  on the Cover of  the new issue of  Mania Magazine looking Beautiful as always.Mid forties is looking real good . I am telling you,there is something about this Era ,people are refusing to age! In the Magazine she talks about the  Miss Nigeria Pageant  and Elohor Aisien?

Check out this Beautiful Ankara Bags and Purses by Nigerian Based Designer DFL (Designs for Love)  . The Bags are very Colorful and Beautiful and of course Trendy. If you are Interested in purchasing one send an Email to  wunmia@yahoo.com or info@designforlove.com.ng .

I am so  into Floral designs these days. It was big on the Runway this year.Valentino was one of the first Designers that made me take notice of it. Moschino  had some beautiful Floral suits in  their 2012 spring Collection. Florals have always been around,but what makes it look fabulous and really desirable is when the fit is right and the outfit   is styled perfectly.

Check out different ways it has been worn by different Celebrities.

My girl Kelly Rowland in a Floral skirt. If you notice,herself and Beyonce paired their Florals with Black tops.

Olivia Palermo also in a Floral blouse.The Blouse is actually  Diane von Furstenberg .She paired it with a  black tuxedo-style vest, and track like styled black shorts and Nice (Black) sunglasses.. She is sooooooo chic!

TW Steel and Kelly Rowland have partnered to have a line of watches .The launch happened last night  at the Boom Boom Room in NYC.

Kelly’s  Dress is by Alexander McQueen

A Pool outside your balcony? Fascinating! Its happening in India!

Its been a while i posted anything in my travel category.This post is for my readers who like to travel and like very Avant-garde things . Aquaria Grande Tower is two 37-story towers residential complex designed by Cyber Architect James Law  currently under construction in Mumbai,India.These Condos are designed to have glass swimming pools on balcony right outside the apartment!Can you believe it ?!

A suite with my own pool on my balcony,that’s Amazing!